I’m not much of a writer, so I’m not going to even try and pretend I could fake it. I’m going to cut straight to the point.

Good news all around on the guild vault front. Were positive across the board in terms of credits received vs. credits spent. Take a look at last week’s expenses: 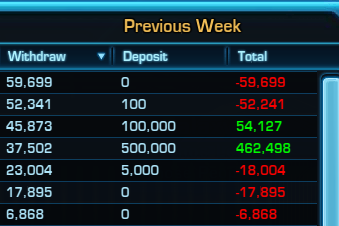 The week before that had similar profit but to a smaller degree. Now if this trend continues we have a few options ahead of us and a poll will be coming up for you to choose where we head.

There have been some rapid changes with our raiding. We’ve lost a few tanks and a few healers. This puts us at worst with a full 8 man group. The problem arises from all of our conflicting schedules. Now a post is going to come up on the forums where we are all going to vote on days we are willing to raid and the time slot for that day. The goal here is to find 2 days out of the week to raid with both raids giving everyone in the guild a chance to raid.

Games on The Horizon

We have a few of us preparing for a few different games. Let’s talk about some games coming out in the next 6 months that some of our members are looking forward too.

Now what does this mean about TOR? Diablo and X:Rebirth are a different breed of game altogether and shouldn’t conflict too much. Guild Wars 2 has no subscription which implies both being playable without any extra finical burden.

But I’m not a fortune teller and at the moment only 3 of our members are interested in it. So at this point we just have to wait and see.

That concludes all the information I had to post. I’ll be posting those polls in delayed order. First one up is the Raid Schedule. After that poll has finished we’ll hit up what to do with all that money in the guild vault.

Click here to cancel reply.
Those People 2021©
Skip to toolbar